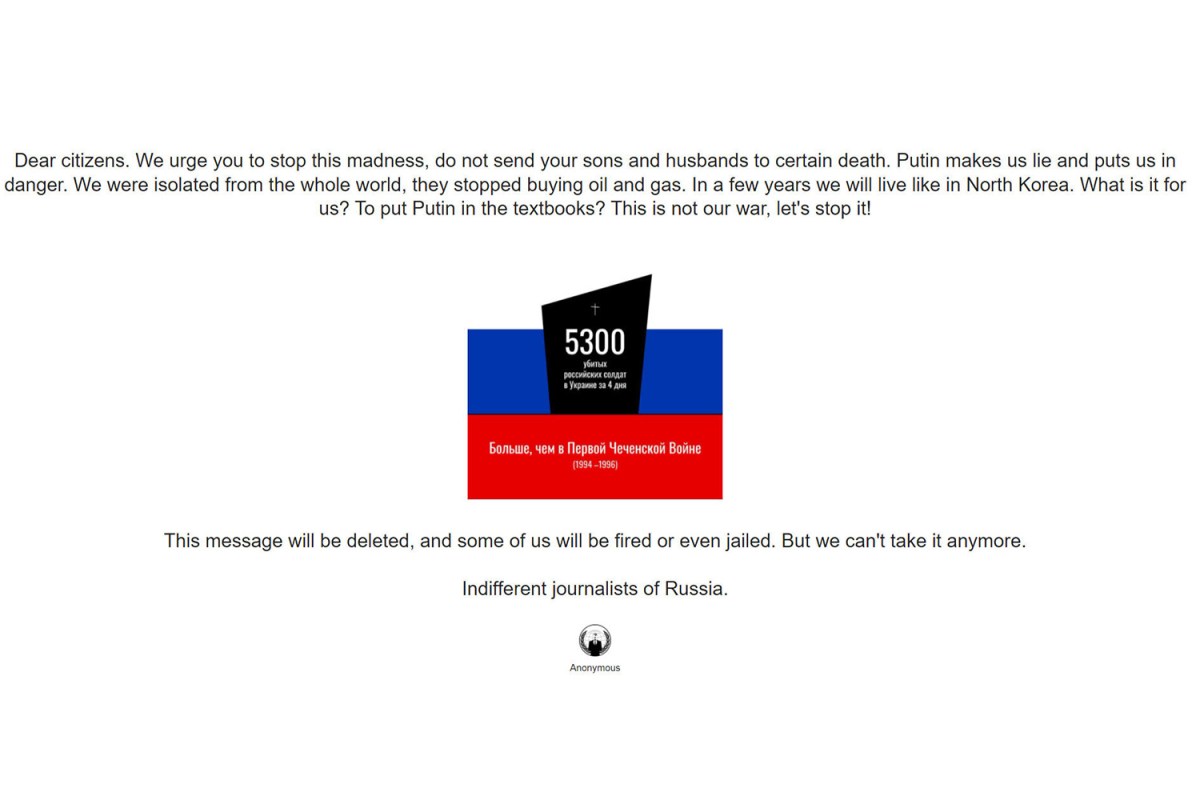 Hacking collective Anonymous have claimed they have successfully breached more than 300 Russian websites and are offering troops £40,000 to ditch their tanks.

The offer to buy tanks from Russian soldiers emerged after reports that Russia refused to open its stock market this morning.

He first said that they would delay its opening for a few hours, before finally declaring that it would remain closed all day.

The notorious hacker community claims to have raised more than 1 billion rubles (£7.8m) and is offering tank crews 5 million rubles (£39,000) for each tank returned, according to Ukrainian media.

The collective advises Russian troops to surrender with a white flag and use the password “million” to show that they accept the conditions of the collective.

Anonymous allegedly told Russian soldiers: “Russian soldiers, everyone who wants to live with their families, children and not die, the anonymous global community has collected 1,225,043 RUB in bitcoins to help you.”

The move comes after the notorious international hacking collective declared war on Putin’s war machine in response to a call to arms from the Ukrainian government.

Ukrainian Deputy Prime Minister and Minister of Digital Transformation Mykhailo Fedorov reportedly announced on Saturday the creation of a Telegram channel for the Ukrainian IT army.

He said: “We are creating an IT army. We need digital talent. All operational tasks will be given here. There will be tasks for everyone. We continue to fight on the cyber front.

He added: “In 2022, modern technologies are one of the best answers to tanks, rockets and missiles.

“I have reached out to the biggest tech giants in support of sanctions against the Russian Federation. We have asked them to help us end this outrageous aggression against our people!”

🔵 Read our Live Blog Russia – Ukraine for the latest updates

The highly decentralized hacking collective that made headlines more than 10 years ago with the Occupy Wall Street movement reportedly ramped up attacks on Russian targets over the weekend, claiming more than 300 successful breaches, including the public news agency TASS.

This also includes the alleged hacking of Russian TV so that all channels broadcast Ukrainian folk songs, as seen in this footage, with the pro-Ukrainian hackers claiming the hack saying they are from Anonymous.

The hacking collective also claimed to have taken down the state media RT (Russia Today) which is about to be banned in the European Union, as well as the state-funded media Sputnik, with the President of the European Commission, Ursula von der Leyen. , declaring: “We will ban the Kremlin media machine in the EU.

State corporations Russia Today and Sputnik, and their affiliates, will no longer be able to spread their lies to justify Putin’s war.

The hacker group said on Twitter that 300 websites belonging to Russian government agencies, state media, banks, as well as websites of major Belarusian banks, including Belarusbank, Priorbank and Belinvestbank, were all hacked. They said: “Access to sites belarusbank.by, priorbank.by, belinvestbank.by is denied.”

The usual websites were replaced with a message calling for an end to hostilities.

“Dear citizens, we urge you to stop this madness, do not send your sons and husbands to certain death,” the message read. “Putin forces us to lie and puts us in danger.”

Everything you need to know about the Russian invasion of Ukraine

Everything you need to know about the Russian invasion of Ukraine…

Many accounts linked to the loose and highly decentralized collective have posted messages, images and videos calling on the world’s hackers to unite against Russia after “dictator” Putin invaded its neighbor last week.

They said: “Anonymous has taken down more than 300 Russian government, state media and banking websites in the past 48 hours, with most of them currently offline.”

Posts purporting to be from members of the collective and videos are shared on social media platforms including Twitter, Facebook and Reddit with the hashtags #OpRussia, #StopRussia, #OpKremlin and #FreeUkraine, among others, calling out hackers around the world to target Russian websites.

Many have previously claimed to have successfully breached Russian platforms, including the Russian Defense Ministry, by posting a massive database of emails, passwords and phone numbers online.

After that, the Ukrainians allegedly started calling the employees of the Russian department and asking if the aggressor country planned to bring home the bodies of dead Russian soldiers at some point.

The collective said on social media: “Hackers around the world: target Russia on behalf of #anonymous, let them know we don’t forgive, we don’t forget. Anonymous has fascists, always.

Russia says its forces intervened in Ukraine in a “special military operation” to demilitarize the country.

The state communications regulator has warned local media and foreign tech companies against what it says are misrepresentations of Russia’s activities in documents posted online.

“We have been isolated from the whole world, they have stopped buying oil and gas. In a few years, we will live like North Korea,” the message continued. “What’s the point? So Putin can go down in the history books? This isn’t our war, let’s stop him!”

We pay for your stories!

Do you have a story for the Sun press office?