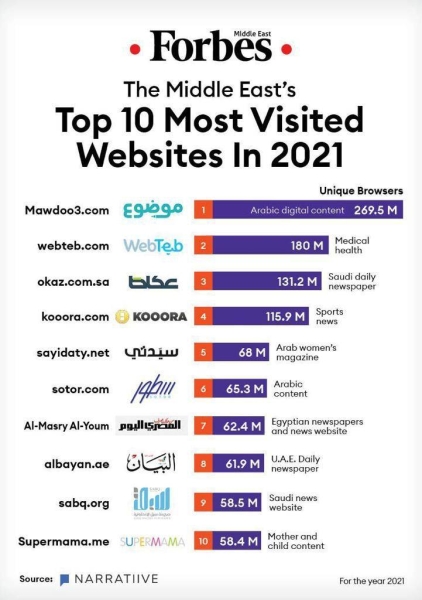 JEDDAH — The website of leading Saudi daily Okaz was ranked among the top three most visited online platforms with Arabic content in the Middle East and Africa region in 2021, according to business magazine Forbes.

Unsurprisingly, news websites and aggregators saw the most entries, accounting for more than half of the top unique visitors list. Saudi Arabia and the United Arab Emirates each have two entrances.

Okaz.com.sa with 131.2 million unique browsers came third in the ranking, which is based on data available for the calendar year 2021.

Launched in 1960, Okaz is a Saudi daily newspaper published by OKAZ Organization for Press and Publication and printed simultaneously in Jeddah and Riyadh. Okaz has two sister publications, Saudi Gazette and Al-Nadi.

The Okaz website provides the latest updates and news from the Kingdom, the Arab world and around the world, as well as an expanded range of articles, videos and podcasts on lifestyle, culture, society and the economy.

The platform has 2 million Twitter followers and around 26.9 million views on its YouTube channel, as of January 26, 2022.

Jameel Altheyabi, editor-in-chief of Okaz and general supervisor of Saudi Gazette, said the newspaper continues to keep pace with the rapid progress being made in the media industry around the world. Based on a long history and sound professional principles, it occupies a leading position among Middle East readers with a human capital of qualified professional cadres, who adhere to the triplet of sustainable success, credibility and reliability, has he declared.

Altheyabi added that Okaz is planning for the future with an advanced working mechanism and periodic review, with the full backing and support of the Chairman of the Board, Sheikh Abdullah Saleh Kamel, the members of the Board of Directors and of his editorial and management colleagues. departments.

Two women-only websites made it into the top 10. In the wake of the pandemic, WebTeb, a health and wellness website, took second place.

Based in Dubai, United Arab Emirates, WebTeb is a leading Arab medical platform that produces and publishes trusted health, nutrition and wellness information. It offers a range of digital health services allowing Arabic speakers direct access for interaction with health experts, doctors, hospitals and insurance companies. The platform claims to source content from experts in the field and by partnering with Harvard Medical School, Mayo Clinic, WHO and NHS.

Mawdoo3.com, the website with the most unique visitors, originates from Jordan, which also has two entries. The most populous country in the region, Egypt, surprisingly only has two entrances.

Mawdoo3 is a leading Arabic content platform, commonly referred to as the Arabic Digital Encyclopedia, which offers a wide range of information on social, educational, entertainment, self-help topics, and more.

The Jordan-based website was founded in 2010 by entrepreneurs Mohammad Jaber and current CEO Rami Al-Qawasmi.

Fourth place was occupied by Kooora.com, owned by Khalid Aldoseri, who originally set up the website in 2002 in Bahrain to cover soccer match results only. Operations were transferred to Dubai, United Arab Emirates in 2012, then expanded to Beirut and Cairo. Kooora covers 40 different sports, with football making up 80% of its content, while tennis makes up 10%.

Sayidaty, which ranked fifth, is one of the region’s leading Arab women’s and family magazines. It was founded as a weekly social and women’s magazine covering fashion, beauty, health and lifestyle, and technology, among other categories.

The website is a place where women from all walks of life, such as businesswomen, artists, designers, athletes, IT professionals, can get information on the latest trends and thoughts.

Today, Sayidaty.net is one of the first regional magazines to carry a daily TV show.

The magazine’s YouTube channel has over 633,000 subscribers with over 164 million views and 4 million followers on Instagram as of January 2022.

Sayidaty.net is followed by sotor.com, Al-Masry Al-Youm and Al-Bayan newspaper in the UAE.

Established in 1980, Al Bayan newspaper is one of the leading Arab and Gulf newspapers monitoring events and news through a network of correspondents and editors covering daily news in the UAE and the region.

Besides Okaz, sabq.org is the only Saudi digital platform to make the Forbes list.

Sabq.org is a Saudi newspaper founded in 2007 by Ali Al Hazmi. Its presence in digital media through its website and mobile app, providing the most important news and press coverage around the clock. As its name suggests, the electronic magazine’s goal is to be a pioneer in the credible communication of events.

supermama.me, headquartered in Jordan and Egypt, is last on the top 10 list.

Supermama.me was founded in 2010, then acquired by Mawdoo3 in 2019. The website helps mothers with information covering all dimensions of their lives written by researchers, specialists and other mothers. Moreover, it also offers tools to help mothers organize their tasks and manage their time effectively. It was developed to be a user-friendly and easy-to-navigate platform.

Supermama also allows each mother to pass on her precious experiences through a community of mothers. —SG