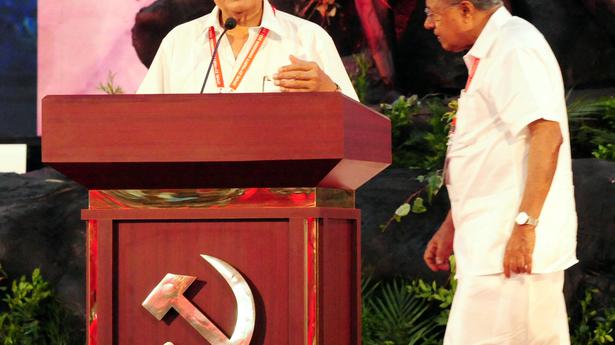 References to the history of communist-led mass struggles in Kerala and the record of the Left Democratic Front (LDF) government, for its second consecutive term, were plentiful at the inauguration of the 23rd Communist Party Congress Indian. (Marxist) [CPI(M)] and the Chief Minister and Pinarayi Vijayan took the opportunity to expound on the state government’s equal focus on “rapid development of infrastructure and ensuring social security”.

Welcoming some 800 party delegates from across the country to Kannur, the district which was the birthplace of the communist movement in Kerala, Mr. Vijayan, chairman of the party’s congress welcoming committee, said that despite pressure on the fiscal federalism, the state government has successfully implemented alternative policies.

He reiterated pledges to eradicate extreme poverty, ensure food security, a clean environment, make the internet a basic right of every citizen, and revitalize agriculture while creating an enabling environment for small and medium industries.

He said that while the government was providing safe accommodation for homeless families, it was also doing its best to set up a semi-high-speed rail system.

“Our government believes in developing infrastructure while doing justice by ensuring fair compensation for people who have to leave their homes. Our party organizes mass campaigns to make this point understood. Economic growth, social justice and environmental protection are given equal importance…” he said.

Mr Vijayan also referred to the “Nava Keralam” document adopted by the party at its conference in Kerala state, saying it was inspired by a similar resolution in 1956. The new document, he said. – he assured the party congress, would go a long way in ushering in a modern Kerala which on the one hand redresses the grievances of the oppressed and on the other hand builds a modern developed state. He criticized Congress and the BJP for following the same set of policies. “Our party, together with other left-wing parties, has constantly organized mass movements against these anti-people measures…” he said. Mr. Vijayan also said that opponents of his party, including the Sangh Parivar, other communal organizations and the Congress, were using “senseless violence” against his party cadres.