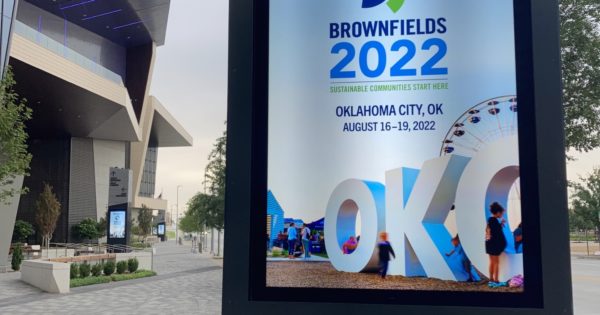 Maude was joined by former SLEDP staff member Cordaryl “Pat” Patrick. Pat is currently the Director of Community Development for the City of Decatur, IL. Maude and Pat were joined by David Doyle, who works for the U.S. Environmental Protection Agency’s Region 7 office in Lenexa, Kansas, and Doug Bisson, who serves as the head of planning and of urban design in the central region of HDR and has expertise in urban design and redevelopment.

Their panel “Revitalizing a Community Affected by Civil Unrest”, discusses the civil unrest that took place in the fall of 2014 following the death of Michael Brown in Ferguson, Missouri and the destruction of numerous businesses near Dellwood. Speakers from the St. Louis Economic Development Partnership, US Environmental Protection Agency Region 7, and HDR, Inc. will describe the impact of these unrest and the resulting community revitalization.

Civil unrest in the fall of 2014 following the death of Michael Brown in Ferguson, Missouri destroyed many businesses near Dellwood. Speakers from the St. Louis Economic Development Partnership, US Environmental Protection Agency Region 7, and HDR, Inc. will describe the impact of these unrest and the resulting community revitalization.

More than a dozen commercial businesses were destroyed along West Florissant Avenue in Dellwood, Missouri, following the death of Michael Brown at the hands of police in nearby Ferguson. Many of these structures were quickly rebuilt, but some remained vacant. In late 2016, the St. Louis Economic Development Partnership (SLEDP) approached the EPA’s Region 7 Land Revitalization Program to request assistance in developing reconstruction plans on these vacant properties. EPA and SLEDP worked with EPA contractors including HDR, Inc. and engaged with the City of Dellwood and local residents to develop concept site plans for 4 of these properties. Subsequent work included the completion of environmental site assessments and a detailed analysis of the community commercial market. As a result of these efforts, in 2019 the St. Louis Urban League purchased 3 of these properties and will use these plans to develop the properties. The development includes a senior living center, bank and spaces for a business incubator, several local non-profits and small businesses.

At the end of the session, attendees will have a unique perspective on how a partnership between local and federal authorities helped a community literally “rise from the ashes.”

If you have any questions about potential brownfields in your community, please contact Maude:

2022-08-17
Previous Post: Rishi Sunak vows to be ‘much tougher’ with welfare system to ‘steer people away from benefits’
Next Post: Critics slam $350 cash payments to Georgia welfare recipients engineered by Governor Kemp | Georgia