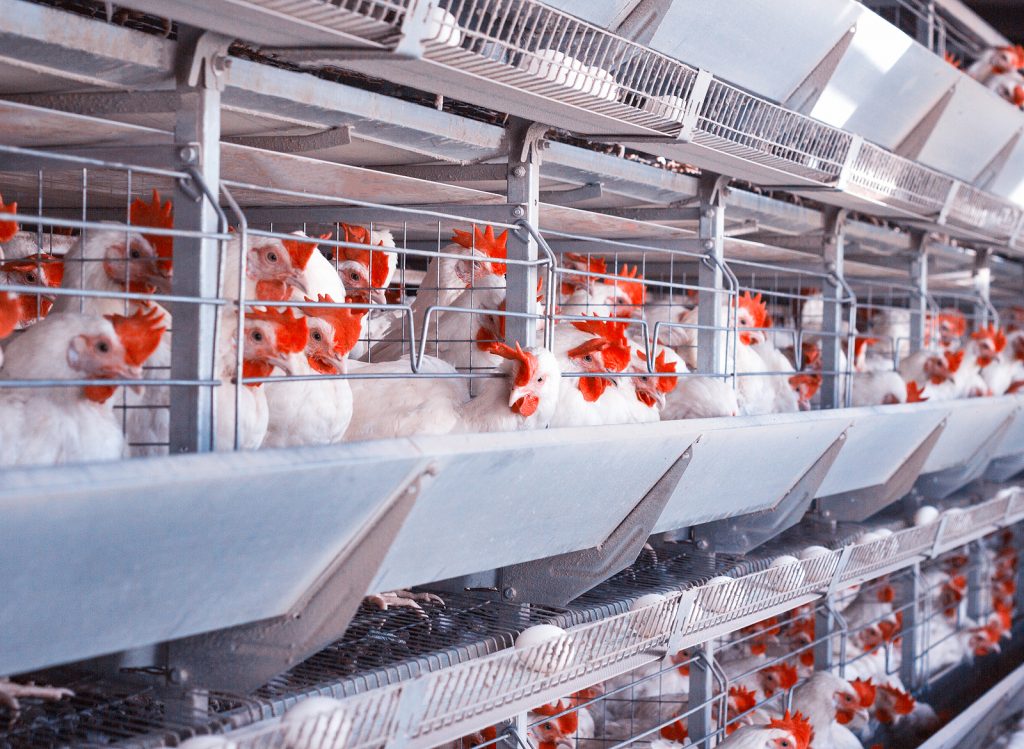 As Poland’s meat production figures continue to soar, animal rights activists are calling on politicians and consumers to raise the bar for the poultry sector.

The numbers are staggering.

According to the Food and Agriculture Organization of the United Nations (FAO), the total number of livestock in the world in 2018 was estimated at 30.6 billion animals, four times more than the species for which they were raised. This represented about 60% of the total mammalian biomass on Earth.

Additionally, more than 60 billion chickens are raised and killed each year for human consumption.

In Poland, annual meat consumption per person has increased from 47 kilograms half a century ago to more than 80 kilograms today.

Over the past two decades, the country has seen a significant increase in the number of factory farms. Last year there were almost 1,400 industrial poultry farms in Poland, each of them housing at least 40,000 chickens in what animal welfare groups describe as inhumane conditions.

“Poland is the largest poultry producer in the European Union, but we shouldn’t be proud of that,” says Marta Gregorczyk, animal welfare expert at Greenpeace Poland.

“Chickens never see daylight during their compressed lifespan. They spend their whole lives locked up in huge sheds, and they’re cramped all the way through,” she recounts. Emerging Europe.

According to Monika Kowalska, an activist with Stowarzyszenie Otwarte Klatki (Open Cages Association), one of the main reasons for the plight of these animals is that modern poultry farming relies on fast-growing breeds.

“These breeds have been genetically modified so that the chickens gain weight as quickly as possible. At the end of their short six-week life, chickens can weigh up to 2.5 kilograms,” Kowalska tells us.

“To put this into perspective, imagine a five-year-old child weighing 150 kilograms,” adds his colleague, Maria Madej.

“Animal excrement contaminates groundwater and soils around the world. To produce massive amounts of soy-based animal feed, we are clearing large swaths of the Amazon rainforest,” says Marta Gregorczyk.

“We also stuff the farm animals with antibiotics and as a result the antibiotics stop working in humans,” she adds.

According to United Nations estimates, by 2050 the global demand for meat will increase by another 200%. To satisfy the growing appetite, the number of factory farms will have to soar to even greater heights.

Meanwhile, the consensus among scientists is that livestock farming is one of the biggest contributors to ongoing climate change.

According to the FAO, the sector is globally responsible for 14.5 to 18% of all greenhouse gas emissions, more than the transport industry as a whole.

“Industrial animal farming is fueling the climate crisis and endangering our health. This is the hidden price we all pay for cheap meat in our stores,” says Gregorczyk.

Ask a hen how it is

Some, however, believe that animal welfare organizations are prejudiced against the poultry industry in Poland and that the real situation is not as bad as these groups claim.

“Industrial farms are regularly checked by state veterinarians. The cases shown in the media by so-called pro-animal groups are exaggerated to play on people’s heartstrings,” Markowska tells us.

Asked about the life of a caged laying hen, Henryk Kowalczyk, Poland’s agriculture minister, diverted the question to a better source of information.

“Why don’t you just ask the hen?” Maybe that can explain what it’s like to live in a cage,” Kowalczyk replied. “He doesn’t know of any other life, so I guess he’s not going through any particular mental struggles because of it.”

According to animal welfare organization Klub Gaja, about 40 million laying hens are now kept in Poland, 87% of which are kept in cages. The average space per hen is slightly more than a sheet of A4 paper.

We asked more than a dozen of Poland’s largest poultry farms for feedback. All of our questions were met with silence.

A glimmer of hope

And yet, according to Monika Kowalska, there is some hope that things will start to turn the corner before long. Retailers are certainly taking note of changing consumer habits, with chains such as Żabka, which has more than 7,000 stores across Poland, announcing on April 1 that he has prepared a plan to completely eliminate caged eggs by 2025 at the latest.

“In the meantime, we will work to increase the share of barn and free-range eggs in total sales,” Żabka said in a statement.

“Polish consumers are making increasingly informed purchasing decisions, and they have finally started to pay attention to the conditions in which animals are raised,” says Kowalska.

“One of the ways in which the international community has tried to remedy the situation is the European Chicken Undertaking (ECC), a document outlining basic requirements for the welfare of livestock. As soon as it is signed and implemented by poultry farms across Poland, the life of chickens in these places will improve significantly.

“All of this means that if poultry farmers want to keep their sales at high levels, they should start thinking about raising animal welfare standards on their farms,” ​​Kowalska concludes.

Unlike many news and information platforms, Emerging Europe is free to read, and always will be. There is no paywall here. We are independent, not affiliated with or representing any political party or commercial organization. We want the best for emerging Europe, nothing more, nothing less. Your support will help us continue to promote this magnificent region.

You can contribute here. Thank you.