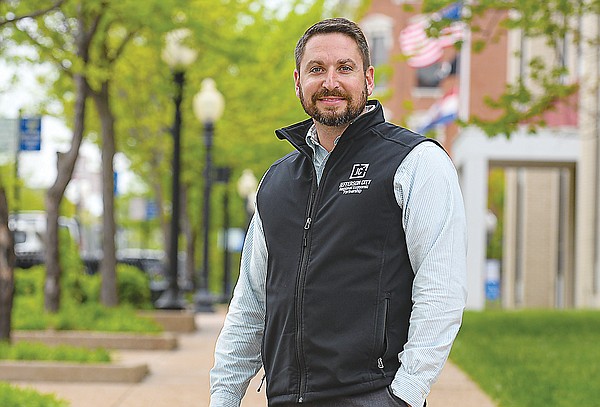 Luke Holtschneider is no stranger to economic development, having worked on some of the state’s biggest projects in recent years.

Now he is bringing that expertise and experience to the home as the first executive director of the Jefferson City Regional Economic Partnership.

A native of Jefferson City, Holtschneider previously held several positions with the Missouri Department of Economic Development, most recently as deputy director. He began his tenure with the department as a project manager just before the 2008 recession, almost immediately seeing the great challenges and great rewards of work that would inform the response to another economic crisis more than a decade later. .

“You’ve seen the challenges and the problems of industries, you’ve seen the communities struggling with extremely high unemployment and the employers who had to drastically cut their workforces,” he said. “Ultimately the hard times showed me how communities and organizations have been able to survive and thrive and that in good times you see the work that is being done so that you can survive. So that was hugely enlightening for me.”

With extensive knowledge of ongoing efforts in nearly half of the state, he directed DED’s attention to rural communities that were struggling harder to recover from the recession as a manager of rural development. He focused on identifying ways to improve rural communities by engaging with communities across the state and working with various stakeholders, from rural electric cooperatives to the Regional Planning Commission.

Even back then, Holtschneider said the most common problem he heard was broadband.

“There wasn’t a single organization holistically focused across the state on ways to address and help spread broadband. It’s a public service, it’s a component infrastructure, somebody should take care of it, so we were able to sort of organize some key groups to really focus on the problem, which is the lack of broadband, as well as the lack of focus on it as a state.”

Holtschneider and DED worked with the Department of Agriculture to create the State Broadband Office. The office has continued to engage with lawmakers and the executive branch to encourage broadband development and, recently, to help determine uses of federal COVID-19 funds.

In 2017, Holtschneider was approached to take on the position of deputy department director during a period of reorganization and refocusing of the DED. After a few years at the forefront of the department’s budget process and engagement with partners for research and strategy, DED found itself in the midst of another crisis of the COVID-19 pandemic in beginning of 2020, a situation that the State has addressed from an economic point of view as much as on health.

Jefferson City and Cole County, meanwhile, have opted for a new entity separate from the Jefferson City Area Chamber of Commerce to manage their economic development projects. As the newly formed JCREP searched for a leader, Holtschneider said he saw the perfect opportunity to direct his expertise and experience into the community he calls home and took the reins in mid-2021.

“I love the community,” he said. “Ultimately, the approach and training I had at the state helped prepare me from a strategic perspective to question what we do, why we do it, how we’re doing it, not just doing what’s always We’re finding out how we can understand what we’re trying to do as a new organization.

Holtschneider said the group’s goals include broadband coverage of the area, redevelopment of Missouri State Penitentiary property and expansion of business growth opportunities. With many projects on the horizon and a lot of work to do, he is ready for the challenge.

“If you ask a stranger on the street, ‘What is economic development?’ it can mean a lot of things to a lot of people. Because if you break down the words, you know, it’s developing, it’s growing, it’s getting better, it’s building on the economy,” he said. “At the end of the day, I think everyone wants to see a stronger community with a growing population and increased wealth. And that’s what we focus on.”