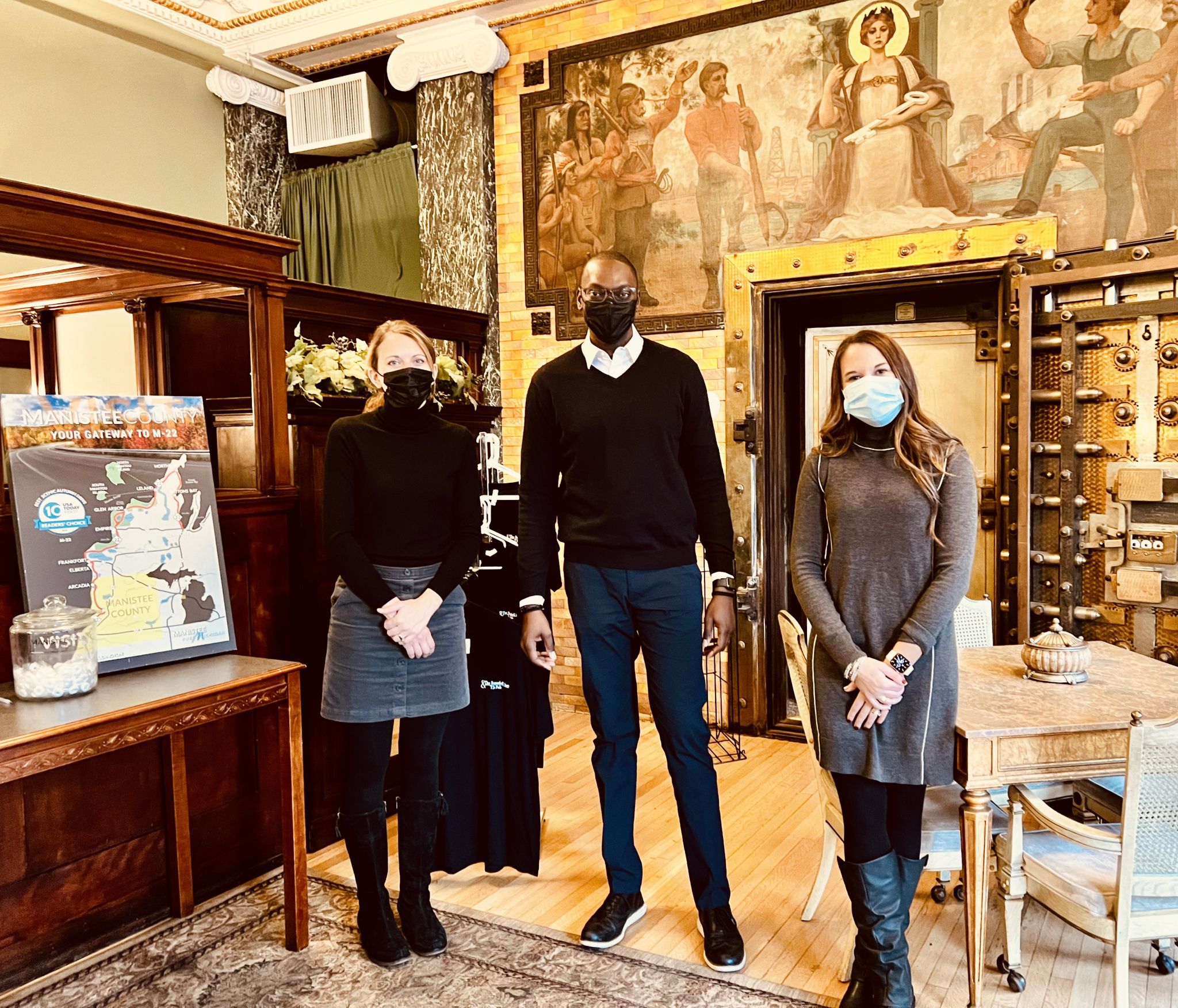 MANISTEE – Stacie Bytwork was surprised when she received a call from the governor’s office about Lieutenant Governor Garlin Gilchrist visiting Manistee to talk about economic development. She only had a few days to put everything in place for the lieutenant governor.

She said the “Lieutenant Governor is very down to earth” and it was easier during her visit to talk about some of the strengths and challenges facing the community.

“It was very exciting to have the Lieutenant Governor, especially in our community,” she said.

Gilchrist visited Manistee on Monday, meeting with the Economic Development Board of the Manistee Region Chamber of Commerce, to discuss development plans in the region.

He was greeted over breakfast at West Shore Community College’s downtown education center, by the chamber’s director of economic development, Marc Miller, and Mayor Lynda Beaton.

The lieutenant governor also spent the night on Sunday and was shown already completed projects in Manistee, according to a press release from Bytwork, president and CEO of the Manistee Region Chamber of Commerce.

Prior to the meeting, Gilchrist dined at the Bluefish Kitchen + Bar with his staff. This gave the Lieutenant Governor the opportunity to see one of the catalytic projects that rehabilitated an underutilized property and created 23 positions. The Manistee DDA has provided a loan of $ 70,000 and a facade grant of $ 15,000 for the rehabilitation of the building (Bluefish Kitchen + Bar). The Michigan Strategic Fund has approved funding of $ 330,000 in Community development grants to support the project. The iconic property acquired by Blue Fish Kitchen, LLC, created a full-service restaurant in downtown Manistee. “

The Lieutenant Governor also spent the night at the Ramsdell Inn. This gave Gilchrist the opportunity to speak to entrepreneur Lindsey Swidorski about her business and the challenges she has faced over the past year.

Swidorksi said: “It was a pleasure to have Mr. Gilchrist as a guest and I am very encouraged to see his interest in identifying the wants and needs of small communities like Manistee.”

On Monday morning, the Lieutenant Governor received a tour of the new facility and collaboration space in the West Shore College building in downtown Manistee, as well as a meeting with Michigan Works! and chamber teams.

Bytwork also spoke of the value of Gilchrist’s visit.

“I was grateful to receive information from our contacts within the Whitmer administration on the advisability of meeting the lieutenant governor. Because of our leadership and relationships on key issues, we have been able to broaden this opportunity to have a constructive dialogue with our business and community leaders, ”she said.

Later that day, the Lieutenant Governor visited Honor to visit accommodation project that is in progress. A performance-based grant from the Michigan Community Revitalization Program of $ 459,434 that was awarded to Homestretch to help fund the creation of eight apartments in honor; a duplex and a sixplex.

Gilchrest noted that affordable housing is a priority for the governor’s office.

“This summer, the governor and I proposed $ 100 million to invest in affordable housing projects in the state of Michigan. That’s $ 100 million in federal resources that we can mobilize, and we have close to $ 400 million in private investment in affordable housing in the state of Michigan. This will help the places to be built as a place of honor, ”he said in an interview with News Advocate’s sister newspaper, the Benzie County Record Patriot.

• The college discussed the impact of economic development and educational institutions in downtown Manistee; A $ 5 million investment by the college and how it sparked new interest and development among downtown entrepreneurs;

• The Downtown Gateway transformation project, leased by Little River Holdings, for a new hotel and other mixed-use buildings for the downtown entrance;

• Support for Bear Lake Highlands Golf Course, another project of the Little River Band of the Ottawa Indians;

• Relocation of the Manistee Lake railway line and creation of trails to transform a second waterfront area;

• Challenges related to staffing and labor demands; and

She stressed that the meeting was largely about economic development and past projects as well as the future. She said she chose the Bluefish because a building that was rehabilitated and opened in 2013 was similar to the type of projects underway at Manistee, similar to what is happening with Fricano, turning older and decaying properties into types of businesses that will attract more people to Manistee.