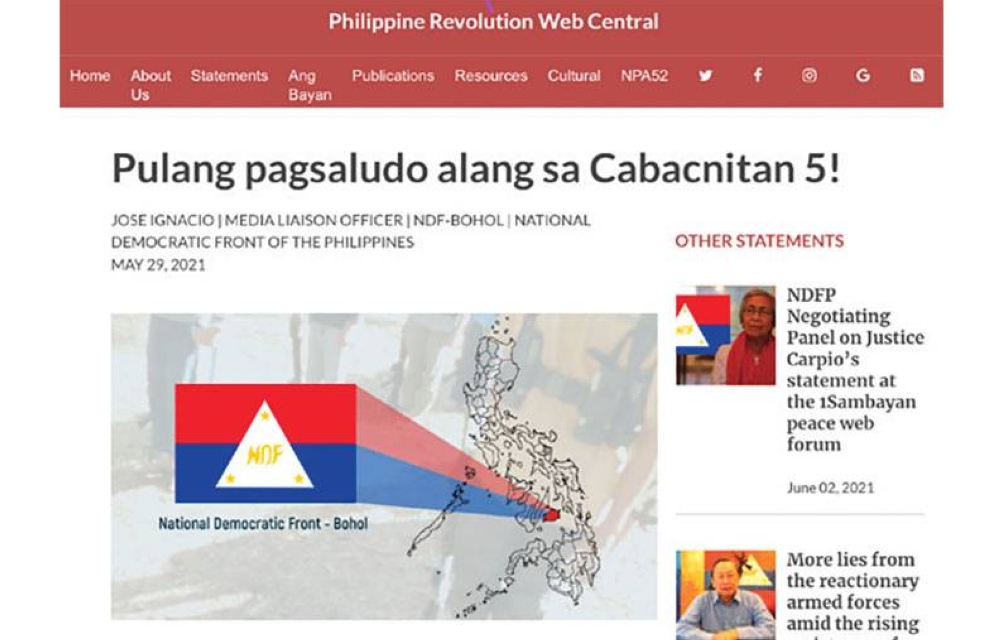 On NTC’s shutdown of CPP-NPA-NDFP-related websites

The National Telecommunications Commission (NTC) has taken down 28 websites that former national security adviser Hermogenes Esperon Jr. identified as being associated with the Communist Party of the Philippines (CPP). Since the CPP has been declared a terrorist organization by the government, any affiliated organization is considered a promoter of terrorism by virtue of its association and must be subject to restrictions.

The CPP itself, via Twitter, claimed that only seven of the 28 sites had any connection to the party and its political arm, the National Democratic Front of the Philippines (NDFP) and, I must add, the New People’s Army (NPA ). The seven websites of this underground trinity that were affected by the NTC’s order to block internet access included, among others, Philippine Revolution Web Central, NDFP.org and websites of lesser known underground organizations, the Revolutionary Council of Trade Unions and the Overseas Revolutionary Organization. Filipinos and their families.

Screenshot of Philippine Revolution Web Central, one of the websites blocked by the NTC.

The websites of the sectoral organizations of fishermen, agricultural workers and peasant women who are part of the surface national democratic movement have also been taken down. Some would say it’s “red tagging”, but to me it’s calling a spade a spade. To simply refer, for example, to Pamalakaya Pilipinas as a “progressive” or “activist” sectoral organization is too vague and general to explain the aims and objectives of the organization concerned. The leaders of Pamalakaya, UMA and Amihan, as well as the long list of sectoral and cause organizations of the national democratic movement, may not be armed rebels or members of the CPP, but their end goal is nevertheless the same: the socialist revolution. They have unity of purpose and push the same agenda. These are the reaffirmists after the great split of the early 1990s.

The same goes for the NGOs on Esperon’s list: Rural Missionaries of the Philippines and Save Our Schools (SOS) Network. The SOS network has been the biggest recruiter for the NPA in Mindanao in recent times. Dozens of so-called Salugpongan schools under the SOS umbrella operated across Mindanao, including Davao City. Sometime in 2015, army troops discovered the true purpose of some – not all – of the schools in Salugpongan. With the schools under pressure from the military, organizations belonging to the National Democratic Movement evacuated the affected communities to Davao City where the LGU (local government unit) was known to be sympathetic to their cause. It wasn’t until 2019 that the Davao city government finally denied business license renewals to schools in Salugpungan, forcing SOS and its partner organizations to transfer students to Cebu. Some of the students had already been brought to Cebu for an “exhibition” in 2018, and the “Bakwit School” was launched. The program, according to the Facebook page of one of the host organizations, included Jose Maria Sison’s Youth on the March and Maikling Kurso sa Lipunan at Rebolusyong Pilipino. “Red-tagging” here is clearly an understatement.

Get the latest news

delivered to your inbox

Chad Booc, a teacher at the “Lumad Bakwit School in Cebu”, was killed in Davao de Oro last February in what authorities say was an encounter. Booc’s friends deny that he was a member of the NPA. Given the National Democratic Movement’s consistency in deliberately concealing the fact that a slain colleague was indeed a full member of the NPA, we may never know the truth. I say this as someone who has followed insurgency-related news for over 20 years. The pattern is clear; concealment, predictable. The question is not whether or not the late Chad Booc and countless others like him belonged to the NPA. Rather, the problem is with their colleagues, who use the media to spread and perpetuate lies and deceit.

‘Bulatlat’ may have been banned from its regular website, but its stories can be accessed via a mirror site, hosted by one of its alternative media colleagues. Does it promote terrorism? I do not think so. Rather, it is a rich source of information about how the national democratic movement views the world, whether or not the reader agrees with the perspective.

Sites directly linked to the CPP-NPA-NDFP, some of which have been shut down by the CNT, on the other hand glorify armed struggle, including murder. The bragging of liquidations lays bare the lack of respect for human rights and due process. Connections between underground and surface organizations are exposed, while details of ambushes, liquidations and encounters are valuable for research purposes. Of course, all propaganda – one-sided information – should always be taken with a grain of salt.

The marketplace of ideas is a key ingredient in a democracy where minds are sharpened by exposure to a variety of conflicting perspectives and appreciation of facts. The discerning mind will know how to distinguish propaganda from substance. As for ending the insurgency, that goal is hardly achieved by shutting down some websites and Facebook accounts. Armed struggle and revolution will remain attractive as long as social, economic and political injustices persist.

2022-07-03
Previous Post: In speech on welfare, BJP slams ‘family politics’ | Latest India News
Next Post: Cost of living crisis Budget 2023: pensions and social protection will be in the spotlight